Four Tips to Improve Your Search by Enhancing Your Query's Structure

Parts of a Query

A short but important post today - we’ll go over four easy tips and tricks for improving your search performance by putting a little thought into how you structure your query. But first, a little primer on the parts of a query.

A Gravwell query represents a dataflow. Data entering one module gets modified, dropped, enriched, etc., and is propagated to the next module in the query.

This query has four components:

The most important observation when creating a query is that all data emitted by a module is seen by the next module in the pipeline. If we can limit or filter data early in a pipeline, we can dramatically improve the performance of the overall pipeline simply by removing the amount of data processing required.

Gravwell supports data acceleration. This means that extractors (modules such as json, csv, and others) can send “hints” to indexers about what they’re searching for. For example:

This query uses the json module to extract a field “foo” from the default tag. Additionally it filters down to just values of “foo” that equal “bar”. With data acceleration, the json module can inform the indexer that it will be filtering for the value “bar”. The indexer in turn can only extract entries containing this word.

There are ways, however to prevent Gravwell from inferring this. First, let’s look at a very bad example:

This query (poorly) counts the number of entries that are valid JSON with a member "foo" that contains the contents "bar". There are a number of things about this query that decrease performance:
A much faster and equivalent query would be:

In this rewritten version, the key optimization is that the json module can hint to the indexer that it is looking for the keyword "bar". Then, if the indexer has acceleration data for that tag, only entries containing "bar" will be sent to the pipeline. This greatly reduces pipeline processing overhead.

There are a number of data acceleration engines and extraction modules that allow you to tailor what and how data is indexed (for example json vs pcap). For more information on acceleration, see the acceleration documentation.

The next tip is to minimize what you extract to just what you need. Consider the query:
tag=pcap packet eth.SrcMAC eth.DstMAC eth.Type ipv4.IP ipv4.Payload tcp.Port | max Port | table max
The above query uses the packet module to extract 6 fields and only uses one (Port). Gravwell performs a best effort optimization at parse time to eliminate unused extractions in modules, but there are several scenarios where the extractions may still take place. Therefore, in order to reduce burden on the packet module, which in this example not only has to extract the packet data, but also perform type assertions on MAC addresses, IP addresses, and integers, you can rewrite the query with just the necessary extractions for the end result:
tag=pcap packet tcp.Port | max Port | table max
Filter early
As we already mentioned, data moves from one module to the next in a query. By reducing the amount of data we transit from module to module, we can improve performance. Consider the query:
tag=default json UUID foo | lookup -r data foo bar baz | eval UUID=="cd656e75-d54d-4e80-ac13-bc77abdde0ad" | table
The above query extracts json data, performs some processing on every instance of "foo", and then filters the data down to just those entries with a specific UUID that was extracted in the first module. This query is potentially very costly, as the indexer must retrieve every record in the "default" tag for the given timeframe, and the lookup module must perform additional data lookups. If we moved the filter to the json module instead, we could reduce the overhead considerably, especially if acceleration is enabled on the default tag. By moving the filter to the beginning of the query, we allow the indexer to perform retrieval optimizations on disk, and we minimize the number of entries sent down the pipeline.
An optimized version of this query would look like:
tag=default json UUID=="cd656e75-d54d-4e80-ac13-bc77abdde0ad" foo | lookup -r data foo bar baz | table
In this query we filter first (and possibly enable acceleration if it’s enabled on the default tag), and minimize the data sent to the later modules to just entries we want.

Put condensing modules as late in the query as possible

NOTE: This tip applies only to Gravwell deployments with multiple indexers.
Some modules require knowledge of all data passing through that portion of a pipeline in order to function. For example:
tag=default json value | table value
This query simply asks all indexers to extract "value" from JSON data and show it on a table. This is a simple operation to perform in parallel because the indexers don't need to coordinate or share any data -- they simply send their results to the webserver to be rendered.
Now consider:
tag=default json value subxml | stats mean(value) | xml -e subxml Name | stats unique_count(Name) | table mean unique_count 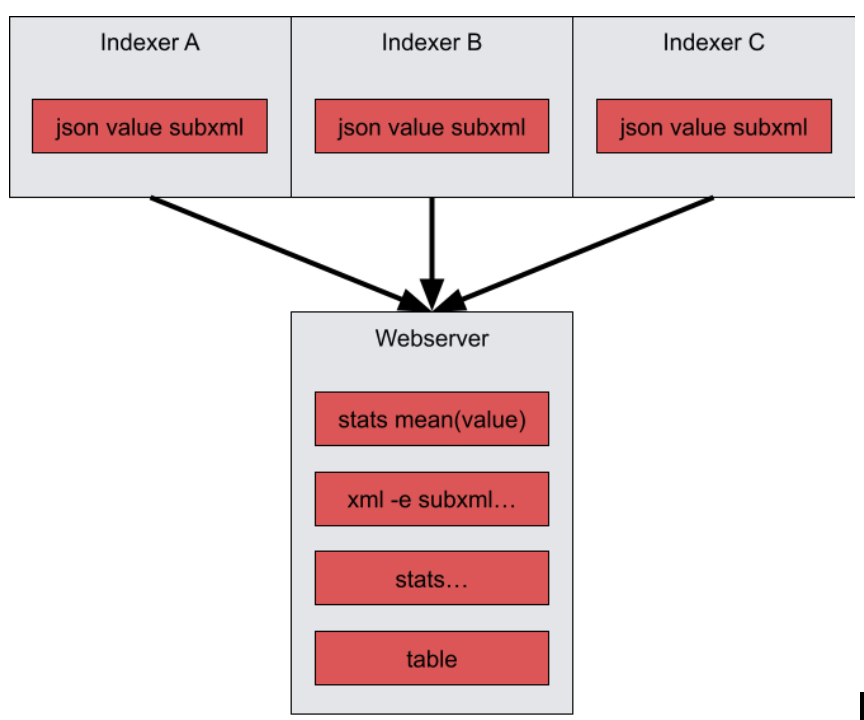 This query performs a mean operation on "value" early in the pipeline. In order to calculate the mean, the stats module must have all instances of "value". This causes the query to "condense" at the stats module, meaning that the indexers no longer run in parallel, but instead send their data to the webserver after extraction, and the remaining query is performed on the webserver. It is best to put condensing modules as late in a query as possible so that indexers can continue to run in parallel. Since no other modules except for table depend on the mean, we can simply rearrange this query. Additionally, the stats module can perform multiple operation in a single invocation: 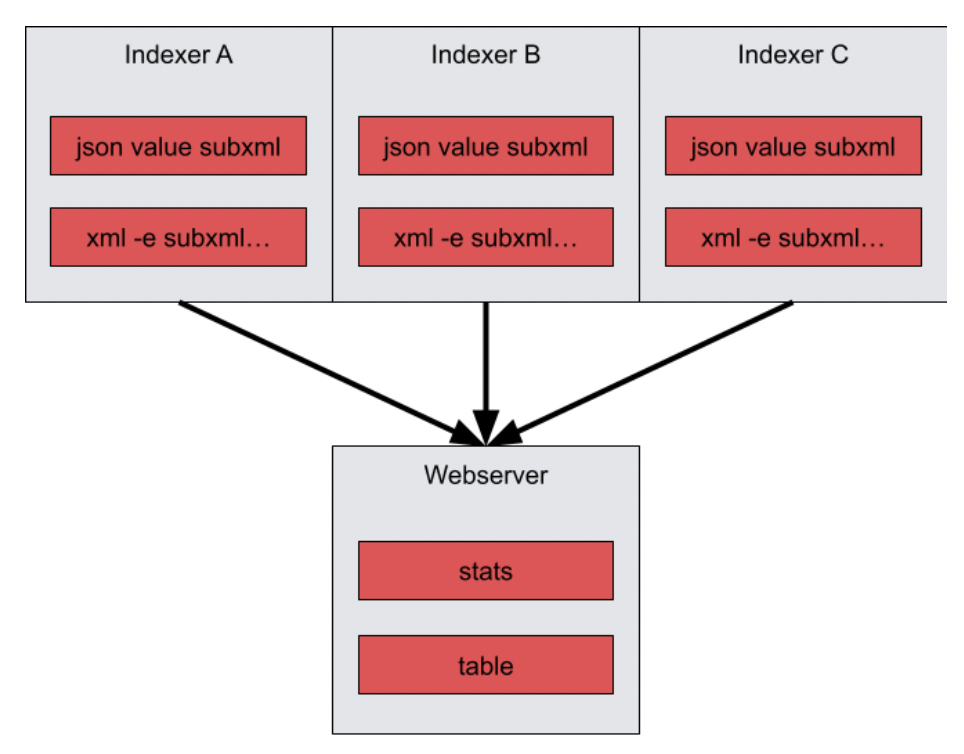 In this form of the query, the indexers perform the extractions locally at each indexer, and then send the data to the webserver to perform the stats operations.